Blog Completed Projects In the NewsMarch 26, 2018

GeekWire Takes a Look Inside Avalara’s New HQ in Seattle 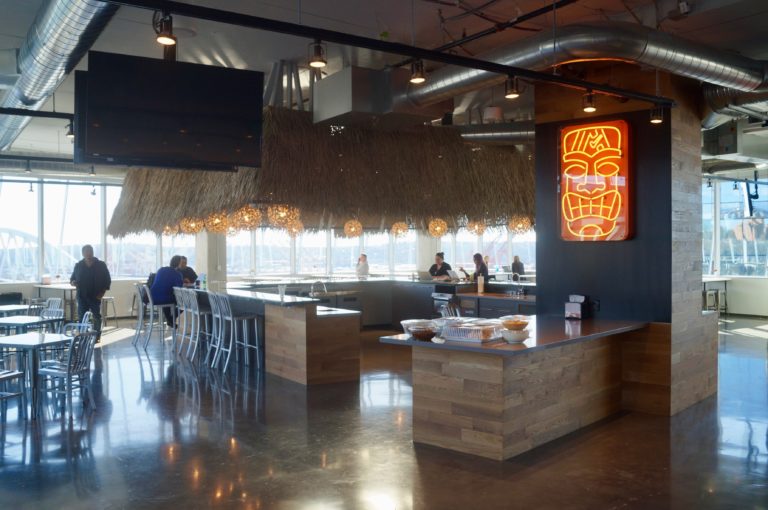 It has been nearly a decade since Avalara had all its Seattle-area employees under one roof. But that changed last month when the sales tax automation company opened a new headquarters in Seattle’s Pioneer Square neighborhood.

GeekWire recently got a tour of the office at the 18-story building, dubbed Avalara Hawk Tower, on the parking lot of CenturyLink Field. Avalara’s new HQ takes up the top six floors of the building and totals more than 114,000 square feet. Currently 400 out of the company’s 1,400 global employees work out of the office, but the space has room for more than 700.

The new headquarters sets up a new era for Avalara, as it continues to grow in its mission of being part of every transaction in the world, a pretty ambitious goal. Will it lead down the path of an IPO, a move that has been predicted for years?

“It’s one of the things we would love to do at the right time,” Avalara CEO Scott McFarlane said of going public. “It will happen at that time, and I can’t tell you when it’s going be. We’ll just know we’re ready to do it at the right time.”

The company started on Bainbridge Island, a 30-minute ferry ride from Seattle. It moved over to Seattle a few years ago, but its workforce was split across multiple buildings in Pioneer Square. Several Avalara executives and employees, including McFarlane, still live on Bainbridge. That made staying in Pioneer Square, just steps from the ferry terminal, an important criteria in the search.

McFarlane says it’s tough for “mid-size” businesses like Avalara to find the right space in the city. A lot of the available offices are for small startups, or “you can do what Amazon does and just buy every single building,” McFarlane said.

McFarlane added that the location is outside of what he called “Amazonville,” where a company can have more of an identity in the neighborhood. Avalara’s desire to make a mark is clear, as the company’s flag flies atop the building and a sign for “Avalara Hawk Tower” sits above the entrance to the structure, which also includes an Embassy Suites by Hilton hotel.

Avalara’s orange color scheme and the tiki-beach theme carry throughout the office. Bryan Wiggins, the company’s vice president of marketing, said the color was chosen in the company’s early days as an alternative to the blues and grays of other tax companies found at conventions. And the beach theme?

“Early on, it was just a symbol of relaxing, being on a beach, being in a hammock,” Wiggins said. “You can do what you want in your life instead of dealing with your taxes.”

Plus, a tiki hut is quite the alternative to a sea of standard booths at a convention. Walls are adorned with a cavalcade of Avalara branded t-shirts and company “manifestos” that show how its mission has changed over the years.

Floors are connected by central stairwells, which help create a more open feel across a multi-floor high rise office that doesn’t sport the huge floorplates favored by most tech companies. On the top floor is a tiki-themed bar that serves beer after work hours. The floor also includes a market and an outdoor deck with a bird’s eye view into neighboring CenturyLink Field, home of the Seattle Seahawks and Sounders.

On one cement wall is an inscription of the text of a 1992 Supreme Court decision in Quill Corp. v. North Dakota. The ruling barred states from collecting sales tax on companies without a significant in-state presence. The issue looms large as e-commerce has taken off, and Avalara has done a lot of work helping companies navigate the rules. The U.S. Supreme Court is set to take another look at the issue next month through the case of South Dakota vs. Wayfair. No matter which side wins out, the decision is sure to keep Avalara busy.

“Whenever you go into a state, you have to know is this a taxable item?” Wiggins said. “Am I supposed to collect tax on this? Am I supposed to register as a tax collector in this state or not? our system provides that information; that’s essentially why we’re in business.”

The move to the new HQ comes as Avalara is in the midst of making changes to its culture. Last year, the company hired an outside law firm to review “internal complaints this year about employees, including executives, drinking to excess at work-related functions and using questionable judgment,” according to a memo from McFarlane to employees obtained by GeekWire.

Asked about Avalara’s changing culture and the adjustments it is making, McFarlane said he always wants to see the company get better, from the products it offers to the way employees and executives conduct themselves. These changes, he said, are another example of that.

“We always want to improve from an engagement perspective, a diversity perspective. I think those are really important topics, and so for me, I think we were just setting the tone for what we want to do this year and in the years to come,” McFarlane said.

Being under one roof should have a positive impact on culture, McFarlane says. People who have worked together for years but were siloed to different offices are meeting in person for the first time. The company is bringing back a tradition from its early days of Friday barbecues for staff and their families that helped forge close bonds.

“When you can walk next door and talk to somebody about a problem, the problem is reduced by orders of magnitude,” McFarlane said.

Zaloni Around The World

Tech firm pendo has big hiring plans. Alliance is excited to be a part of it.